A look back at the 2022 AMP Holiday Concert Season:

December was an incredibly busy, but joyous time at the AMP Center for Performance and Education. From December 3rd through December 10th, all AMP ensembles performed festive holiday tunes that spanned global holiday traditions. The AMP Holiday Concert Season kicked off with the Youth Choirs, both Junior and Senior choirs had the audience on their feet, singing and clapping along. Although the next ensembles to hit the stage were the AMP Preparatory Choirs sponsored by Xfinity, who don’t necessarily bring the same level of experience, they did however bring the same level of excitement to the AMP Center as their older counterparts.

After the AMP Choirs, it was time for all of our Band and Orchestra ensembles. Our most beginner-level students, the Preparatory Orchestra, also sponsored by Xfinity, performed familiar holiday classics, like Jingle Bells and Good King Wenceslas. The AMP Afterschool Orchestra and Band, in partnership with the City of Atlanta Department of Recreation, including both beginner and level 2 string, wind, and brass students, performed next, which included an interactive piece that really got the audience involved.

All of the AMP Holiday Concerts were amazing and full of great performances, we can’t wait for our next concert series: Music of the African Diaspora, coming in February.

In the meantime, you’ll be able to catch a special AMP Holiday Concert featured on One-on-One with Monica Pearson on PeachtreeTV airing Christmas Day, and New Years Eve. More details to come.

“This being my last holiday concert at AMP was very sentimental, I enjoyed the music, I was glad we switched it up this go round. This music challenged me, but I worked with my teaching artists, and he gave me the tools to work it out on my own.” 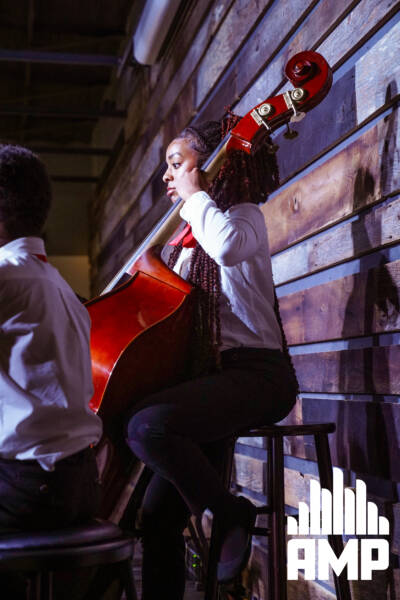