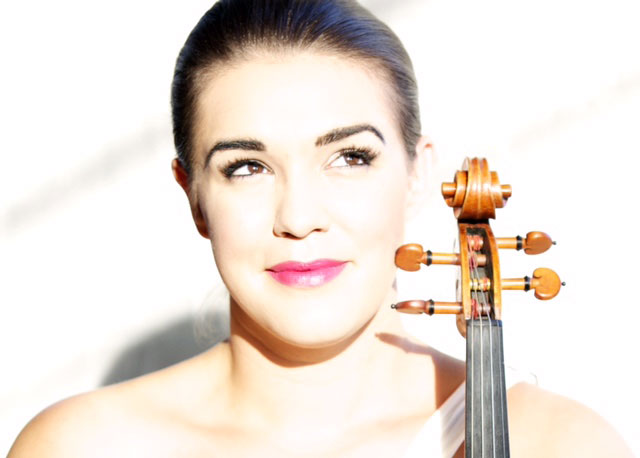 Violist Jennifer Stumm is recognized as one of the world’s dynamic and creative advocates for her instrument, known both for her distinctive sound and unbridled enthusiasm for music. Hailed by the Washington Post for the “opal-like beauty” of her playing, Stumm’s appears on many of the world’s great stages, including Carnegie Hall, the Kennedy Center, the Concertgebouw, Sala São Paulo, and the Wigmore Hall, London. Her solo career was launched after victories in three major international competitions: William Primrose, Geneva and Concert Artists Guild (where she was the first violist ever to win First Prize.) This season she makes her solo debut at the Berlin Philharmonie, performs with orchestras on four continents, plays the complete chamber works of Brahms in Tel Aviv and directs the second year of her festival and social project in Brazil.

An enthusiastic speaker and writer about music, Jennifer Stumm’s TEDx talk about the viola and the blessings of being different, “The Imperfect Instrument,” was named an editor’s pick of all talks on ted.com and she was recently cover artist of Symphony Magazine. She released her second album in 2014, for Orchid Classics, of Berlioz’s Harold in Italy, to much critical acclaim, and performed the work almost fifty times.. Her debut recording for Naxos’ Laureate Series, of virtuoso works by Italian composer/violist Alessandro Rolla, received high critical praise. A recipient of the prestigious BBC New Generation artist and Borletti Buitoni Awards for her work in chamber music, she appears at major festivals such as Verbier, Marlboro, Spoleto, Aldeburgh, Delft and IMS Prussia Cove. Her collaborative partners have included members of the Beaux Arts Trio, Guarneri, Vermeer and Alban Berg Quartets and the period ensemble L’Archibudelli.

Since her school days strings in the Atlanta inner city, Jennifer has been devoted to the power of art to inspire social progress in us all, and especially to the idea that anyone who can do should teach. In January 2015 she founded the Ilumina Festival, a chamber music festival and social initiative in the mountains outside São Paulo uniting prominent international soloists with Brazil’s most talented younger musicians. Ilumina provides opportunity and connections to raise the prospects of a worthy generation of young artists, offers busy soloists a fresh and inspiring space to do their best work, and gives the world a dynamic reminder that talent never decides where it is born.

Native of Atlanta, Jennifer chose the viola in her school’s orchestra when she was eight because she thought it had the most beautiful sound. She went on to study with Karen Tuttle at the Curtis Institute of Music and the Juilliard School and also pursued interests in politics and astronomy at the University of Pennsylvania. Jennifer Stumm is currently International Chair of Viola Studies at the Royal College of Music, London and visiting professor at EMESP Tom Jobim, São Paulo. She performs on a viola by Gasparo da Salò, c 1590, generously on permanent loan from a private collection.

Praised by the New York Times for his “uncommon sensitivity and feeling”, the Israeli pianist Roman Rabinovich is the winner of the 2008 Arthur Rubinstein International Piano Master Competition. Mr. Rabinovich has performed throughout the United States, Europe and Israel in such prestigious venues as Wigmore Hall, Leipzig’s Gewandhaus, Lucerne Festival, Prague Spring Festival, Carnegie’s Zankel Hall, as well as the Great Hall of Moscow Conservatory, Cite de la Musique in Paris and the Millennium Stage of the Kennedy Center in Washington DC. In 2015-16 Mr Rabinovich is scheduled to perform Rachmaninov Concerto No. 3 with the KBS Orchestra and Yoel Levi, as well as return appearances with the Symphony in C, the Ann Arbor Symphony (Prokofiev Concerto No. 3) and the Dohnanyi Orchestra (Bartok Concerto No. 2). Recital engagements include Vancouver Recital Society, Cincinnati Matinee Musical Series, Chopin Society in St Paul, MN, Lincoln Center’s Walter Reade Theatre, as well as the Royal Welsh College of Music & Drama in Cardiff. Mr Rabinovich’s chamber partners this season will include the Doric and the Ariel Quartets. In addition, Mr Rabinovich will collaborate with the violinist Liza Ferschtman for a marathon of chamber music of Brahms in three consecutive concerts in Tel Aviv. Noted by critics for the “vivacity and virtuosity” and “the impeccable clarity of execution” Mr Rabinovich’s 2014-15 season highlights were a recital at the Menuhin Festival Gstaad, as well as a series of recitals at Sir Andras Schiff’s curated “Building Bridges”, which included appearances in Zurich’s Tonhalle, Berlin, Ruhr Piano Festival, and New York’s SubCulture. In March 2015 Mr Rabinovich performed complete Beethoven Sonatas for violin and piano with Liza Ferschtman. In December 2013 Mr. Rabinovich has returned to Wigmore Hall with a solo recital and was immediately invited back for two more recitals in future seasons. In May 2014 Mr. Rabinovich made his Prague Spring Festival debut playing a solo recital in Rudolfinum and Rachmaninov Concerto N. 2 in Smetana Hall. In spring 2014 he toured with the Haifa Orchestra throughout the United States, performing as soloist in 28 cities. The tour included four concertos: Tchaikovksy’s Piano Concerto No. 1, Rachmaninov’s Piano Concertos Nos 2 & 3, and Beethoven’s Piano Concerto No. 3. In 2013, Orchid Classics released Mr. Rabinovich’s debut recording: “Ballets Russes”: Ravel/Rabinovich Daphnis & Chloe, Stravinsky Petrushka; and Prokofiev Romeo and Juliet, all arranged for piano solo. Mr. Rabinovich was honored with the Classical Recording Foundation Artist of the Year award for his CD, which was also given a four-star review by BBC Music Magazine, who had this to say: “This is clearly a labour of love. Rabinovich’s stylish line drawings adorn the booklet, and the enthusiasm of his joyful playing is infectious. There is plenty of dazzling passagework to savor, with the “Dance Russe” zinging along merrily. It is the broad palette of colours that is most impressive, especially in the more poetic moments, such as the closing pages of “Romeo and Juliet before parting” (August 2013)I In addition to winning the top prize and four additional awards, including the prestigious Mezzo Award, best classical concerto, best young Israeli competitor and best performance of an Israeli piece awards at the 12th Arthur Rubinstein International Piano Master Competition in Israel in 2008, Roman has won first prize at the Animato Piano Competitions in Paris in 2007. At age 10 he made his Israel Philharmonic Orchestra debut under the baton of Zubin Mehta, and performed with that orchestra and Maestro Mehta again in 1999 and 2003. Since then his expansive concerto appearances included most of Israeli orchestras (including Israel Symphony of Rishon-Lizion, Israel Chamber, Jerusalem Symphony, Camerata Jerusalem, Haifa, Raanana Symphony orchestras), KBS Symphony Orchestra, Buffalo Philharmonic Orchestra, Symphony in C Orchestra, Paris Chamber Orchestra, Dohnányi Orchestra, Prague Symphony, Ann Arbor Symphony, Riverside Philharmonic, Delaware Symphony, Lubbock Symphony. In addition to Maestro Mehta, Roman has worked with such conductors as Yoel Levi, JoAnn Falletta, Joseph Swensen, Rossen Milanov, Boguslaw Dawidow, David Amado, Yoav Talmi, Noam Sheriff, Uri Segal, Arie Lipsky, Tomasz Golka, Avner Biron. Mr. Rabinovich, born in 1985 in Tashkent, Uzbekistan, began his piano studies at the age of six with his mother, Mira. In 1994, he and his parents immigrated to Israel where he studied with Irena Vishnevitsky and later with professor Arieh Vardi at the Rubin Academy of Music in Tel Aviv. He is a graduate of The Curtis Institute of Music as a student of Seymour Lipkin got his Masters Degree at the Juilliard School where he studied with Robert McDonald. Mr. Rabinovich also excels as a gifted artist. He often combines his concerts with exhibitions of his paintings. Besides traditional painting Mr Rabinovich draws on his IPad. His artwork can be viewed on his website at www.romanrabinovich.net