How a Summer Music Festival Changed My Life Pt. 1

This summer the Atlanta Music Project launches the AMP Summer Series, a music festival and school. Below is AMP’s Executive Director’s take on how a summer music program changed his life. To support the launch campaign for the AMP Summer Series please make a donation at www.ampsummerseries.org. Thank you to those who have already donated! 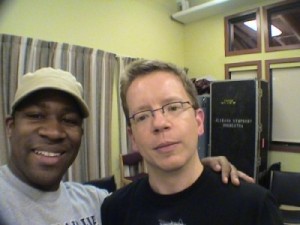 Stephane Levesque and me, many years after our first meeting at Orford.

I attended my first summer music festival the summer after 12th grade. I was fortunate to have maestro Jean-Marie Zeitouni as a conductor in high school. To improve my playing, he encouraged me to attend the Orford Arts Center,  about a four-hour drive from hometown, deep in the mountains of Quebec. Besides the Suzuki piano camps my parents forced me to attend during my elementary school years, I hadn’t been to a summer music camp in years. I hadn’t even heard of the Orford Arts Center. But I loved playing bassoon and I wanted to improve, so I sent in the requested audition cassette tape (remember those?). A few months later I heard back. I had been accepted, with a scholarship! I was set to spend two weeks studying bassoon with a gentleman named Stephane Levesque. Being the clueless, young whippersnapper I was, I had never heard of him.

At Orford I had a one-hour lesson with Mr. Levesque everyday for two weeks. I would quickly find out who he was: Principal Bassoon of the Montreal Symphony Orchestra. For those who don’t know, students usually get one private lesson with a teacher once per week, leaving the student six days to prepare for the next lesson. At Orford I had one day to prepare each lesson. In just two weeks I made the same amount of progress I would have made in about three months of regular lessons. Scales, studies, solos, orchestral excerpts, whatever Mr. Levesque assigned, I was to play it for him the next day, in front of the other bassoonists. No pressure! But I did it, and I was stunned at my rate of improvement. I was even able to perform a solo piece at one of the student recitals.

The Orford Arts Center has perfected the art of the summer music festival. Up in the mountains, there wasn’t much else to do besides eat, sleep, hike and do music. Accommodations and food were provided for all so everyone could be focused on making music. Besides meeting talented young musicians from all over the world – as focused and determined to improve their craft as I was – I got to be around some of the best musicians in the world AND watch them perform concerts. For the classical music geeks, these are just some of the musicians we students were rubbing shoulders with: late cellist Janos Starker (cello God, basically), hornist James Sommerville (Principal, Boston Symphony), and clarinetist Karl Leister (former Principal of the Berlin Philharmonic) and my teacher Stephane Levesque. 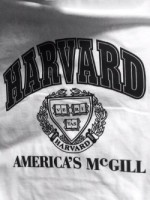 This t-shirt is still sold on McGill’s campus.

I couldn’t believe my luck. I’d practice all day, then at night, I’d get to watch these guys perform, the same musicians who were playing on my CDs back home! And if you stuck around late enough (I did), you might catch these great artists eating a late night meal at the campus pub and they’d give you a few words of wisdom. Quite simply, it was an amazing experience. With everything – the environment, the students, the teachers, the concerts – geared towards the pursuit of musical excellence, you couldn’t help but be inspired. For me, this place was magic. I was hooked.

Lucky for me, Mr. Levesque thought I was talented enough to play bassoon at the college level. It just so happened that just a few months before Orford, I had been sitting in my guidance counsellor’s office flipping through a glossy-covered booklet about the McGill University School of Music. It had fancy pictures of the student ensembles performing around the world and the music faculty, several of whom were from the Montreal Symphony Orchestra. Being that my hometown of Ottawa is just two hours away from Montreal, I had always admired McGill University.  It’s almost always ranked as the number one or two university in Canada. I was pleasantly surprised that in addition to being a stellar academic school, they had one of best music schools in Canada. 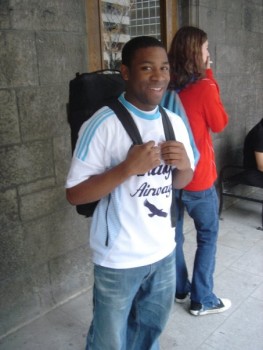 Well, at the end of my time at Orford, Mr. Levesque asked if I had thought about studying music in university. I said “Yes, actually, I’m really interested in going to McGill University.” He said, “Well I’m on the faculty at McGill and I think you’d be a good fit.” And just like that, my pathway to college became a little more clear.

I went back for grade 13 (in Ontario at that time there were five years of high school), and practiced my butt off for college auditions. All I could think about was getting into McGill to study the bassoon. Fortunately my hard work paid off and I was accepted at McGill.

Today, as co-founder and executive director of the Atlanta Music Project, I’m excited to have the opportunity to pay it forward. This summer, the AMP Summer Series will bring the summer music festival experience right to the neighborhoods AMP serves for 100 talented middle and high school students. And to make sure all students can attend, we’re providing 100 full-tuition scholarships. You can support the AMP Summer Series by making a donation to our launch campaign, here.

Who knows, your support might just change a life. Someone’s support for me certainly changed mine.

Leave a reply to SPWilliams Click here to cancel the reply